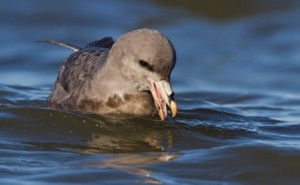 A recent study from a researcher at the University of British Columbia (UBC) has provided evidence that the amount of plastic in the Northwestern Pacific coastal waters has been increasing.   In 2009 and 2010, 67 dead northern fulmars were collected along the coasts of British Columbia, Canada and Washington and Oregon, USA.  The Canadian birds were collected and sampled as a part of BC’s  Interagency Wild Bird Mortality Investigation Protocol (WBMIP-http://www.bccdc.ca/NR/rdonlyres/4158EACF-8CF5-493E-A19E-AB2EF6A99885/0/AI_1pager2012.pdf ).  Necropsies were performed by the CCWHC BC diagnostic centre in Abbotsford (http://www.agf.gov.bc.ca/ahc/).  UBC zoology student Stephanie Avery-Gomm examined the stomach contents that were collected from the birds and found that 92.5 per cent of them contained plastics, most of which comes from plastics used by the public such as bottle caps, styrofoam, twine and rope and candy wrappers.  This amount is comparable with what other studies have found in birds that are known to feed in the notorious North Pacific Central Gyre which is well known to harbor a huge amount of plastic refuse. 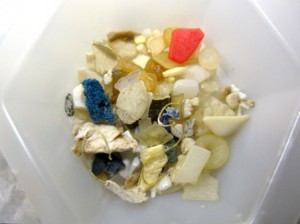 The study hopes to help shed light on the issue of plastic pollution in the worlds oceans and proposes to use beached sea birds as a method of measuring the amount of plastic in the water, which is an otherwise difficult task.  “Beached bird surveys are providing important clues about causes and patterns of sea bird mortality from oil spill impacts, fisheries by-catch and now plastic ingestion,” says co-author Karen Barry with Bird Studies Canada, a not-for profit organization that helped facilitate the study.  They are also hoping that an international standard of sampling can be developed to better compare plastic levels throughout the world.