Hoooo can be hurt by rat poisons…? Owls!

Rat poisons are widely used to suppress rats and mice, and they can be quite effective at suppressing these and many other rodent populations. Unfortunately, rat poisons are not only affecting unwanted rats.  Accruing toxicity data from several countries are showing that these poisons are getting out into the larger ecosystem, negatively impacting both mammals and birds.

In Southwestern British Columbia, Dr. John Elliott at Environment Canada has been doing routine testing for rat poisons in owl carcasses, primarily road killed, since the late 1980’s. The percentage of great, barred and barn owls with residues of rat poisons in their livers has risen steadily from 70% exposure in owls found dead between 1988 and 2003 to 96% exposure in the latest batch testing owls found dead between 2005 and 2011. 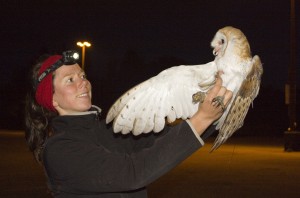 The high exposure of owls to rat poisons, combined with the uncertainties regarding lethal and sub lethal effects of these poisons, led us to conduct a series of field studies to try and understand why owls are being impacted. Researchers from Simon Fraser University in collaboration with Environment Canada investigated the diet of all three owl species, which showed that urban barred and great horned owls, in particular, have a diet consisting predominantly of rats. This explains why these two owl species have the highest exposure and concentration levels of rat poisons in their livers. In addition, an ongoing radio telemetry study monitoring the hunting behaviour of barn owls showed that barn owls do forage in semi-urban environments and in many instances in very close proximity to where large amount of rat poison is actively being applied. The results to date confirm our supposition that owls will eat more rats in urban environments, and this in conjunction with hunting in areas of high rat poison usage, explains why such a high percentage of these owls are being exposed.

The residue and post-mortem data of the tested owls suggests that less than 10% of the owls were deemed to have died outright of rodenticide poisoning. However, very little is known about potential sub-lethal effects and our results should be considered within the context of the other challenges currently facing owls in the Lower Mainland. Habitat loss due to urban development is currently the biggest challenge the owls are faced with. The loss of available hunting habitat for the owls may even force the owls to hunt along highway grass verges and medians where they are at increased risk of being hit by vehicles. Hence throwing rat poison into the mix of challenges might be devastating to the owls if this impedes their ability to hunt effectively in a fragmented urbanized landscape, or reduces their ability to dodge traffic while hunting. The data we have collected has been shared with municipalities and the provincial and federal government, and we hope that making people aware of the issues surrounding rat poison usage we will ultimately reduce the anthropogenic impacts on these wonderful birds.

As we reported in 2012, the Canadian government made some regulatory changes in 2013 which restricts the use of outdoor rodenticides somewhat, however it is thought that these changes may not be sufficient to address most of the issues associated with inadvertent wildlife poisoning.

Pot Gardens’ Use of Poison Looked at in Owl Deaths