Contributions of CWHC Quebec to Special Issue on Birds of Prey

The latest volume of Le Naturaliste canadien features a special issue on birds of prey. The work of the CWHC Quebec regional centre has contributed to three of the manuscripts published in this special issue on raptor conservation: 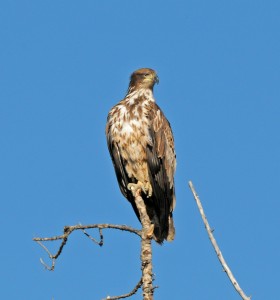 Abstract: The Union québécoise de réhabilitation des oiseaux de proie (UQROP) is a raptor rehabilitation program that has been running in the province of Québec since 1986. It was established with the help of the Faculté de médecine vétérinaire (the veterinary college at the Université de Montréal), the Macdonald Raptor Research Center (McGill University), and the ministère du Loisir, de la Chasse et de la Pêche du Québec. The program covers the whole of the province and nearly 54% of the cases handled are referred by wildlife officers. To date, over 8 000 birds have passed through the program, including specimens of all 27 of the raptor species occurring in the province. The release rate is about 42%, and of the 2 285 banded birds released, 72 (3%) band returns have been documented. As raptors are protected under provincial law, injured or dead individuals must be declared, and these are brought to the network’s facilities by volunteer drivers, or are sent in via air and ground transportation systems. A post-graduate training program in zoological medicine at the veterinary college has lead to a number of scientific publications based on data from the birds received, and an environmental education program, developed in 1990, has helped inform millions of people about raptors. Since its outset, the rehabilitation program has made a solid contribution to raptor conservation.

Abstract: A provincial raptor rehabilitation program operating since 1986 first noticed a significant number of eagle bycatches in fur bearer trapping in Québec. Databases showed 34 golden eagles and 84 bald eagles cases of bycatches between 1986-2012 in Québec. The incidence of bycatches in the admission of live or dead birds for the same period was 62 % (n = 55) for golden eagles and 48 % (n = 177) for bald eagles. A separate database of eagle bycatch declaration to the wildlife officers provided another 187 eagles between 1989 and 2006; thus a total number of 305 eagles from 1986 to 2012. A postal survey in 2009 with a success rate of 38,9 % (n = 2743) revealed that 191 incidental eagle captures occurred and only 33,5 % of the trappers had declared them. According to the databases and the survey, eagle incidental captures essentially occur in canids trapping. Since 2008, efforts have been made to promote the declaration of incidental eagle captures to allow a better understanding of the issue. Additionally, a trapper information and education strategy was undertaken in collaboration with their federation and the stakeholders.

Abstract: Feathers collected from 7 raptor species in Québec between 1906 and 2002 were screened for mercury. The concentrations found in golden eagle and northern goshawk feathers decreased over time. In addition, over the 6- to 8-year period between 1989-1991 and 1997, a 33% decrease in mercury levels was observed in feathers collected from osprey chicks reared in nests close to hydroelectric reservoirs. This decrease is likely linked to a reduction in the mercury levels in the tissues of fish within the reservoirs. In general, however, feathers from bald eagles and ospreys, which feed in aquatic environments, showed mercury levels from 2 to 30 times higher than those from species foraging in terrestrial environments. In the case of the bald eagle, mercury levels were high and the concentration increased with the age of the birds.

These projects are good examples of the impact that wildlife health surveillance programs can have on the conservation of wild species.

All three manuscripts (in French with an abstract in English) can be found on the following site: