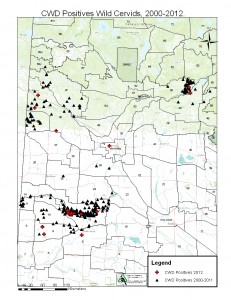 Saskatchewan’s winter 2012-13 Chronic Wasting Disease (CWD) surveillance program is now drawing to a close.  This program is based on testing samples submitted by hunters. Although hunter submissions continue to decline each year, with less than 500 samples submitted in 2012, CWD continues to be detected in areas in which it is known to occur, such as along the South Saskatchewan River valley and in the Nipawin area in east-central Saskatchewan, and in new areas where it was previously undetected, including just west of Saskatoon in the Saskatoon Wildlife Management Zone and south of Swift Current in Wildlife Management Zone 5 (see Map).

In addition to the hunter surveillance program, the Canadian Cooperative Wildlife Health Centre (CCWHC) has detected five cases of CWD since August 2012 through our regular wildlife disease surveillance program.  Each of these animals was submitted to the CCWHC by Conservation Officers from the Saskatchewan Ministry of Environment.  All five animals were severely emaciated when discovered and either were found dead or were killed humanely because of their diseased state.

As noted previously, CWD is affecting a higher proportion of the deer population and is spreading to new areas in in Saskatchewan. The 2012-13 survey bears this out, with continuous detection despite the smaller number of deer tested and detection in new areas also despite this lower detection effort. Unless we learn to control this disease and counter its effects, through greater surveillance and research, it will continue its slow but steady march across Canada, with economic and ecological outcomes for which, currently, we are making no preparations.