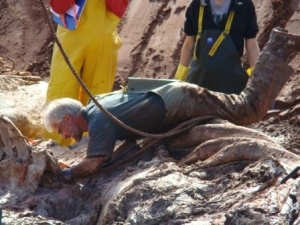 In December of 2007, the CCWHC-Atlantic team was involved in the preliminary excavation of a Blue Whale skeleton. The purpose of this exploratory dig was to find out if it was feasible to recover the skeleton to display at the Beaty Biodiversity Museum atrium at the University of British Columbia.

The whale was buried 20 years ago in a whale graveyard at Nail Pond at the north-west tip of PEI. The preliminary excavation was successful and Dr. Trites’ team will be back in May to exhume the skeleton and transport it across Canada to UBC, where it will be prepared for display. 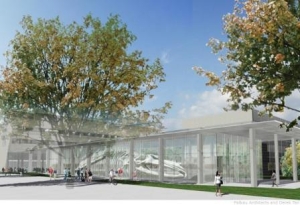 The Canadian Museum of Nature arranged for its remains to be buried on provincially owned land near Nail Pond. The Canadian Museum of Nature and the Government of PEI are supporting UBC’s efforts to exhume and display this national treasure. At 25 metres long, the blue whale skeleton will be showcased in a glass atrium facing Main Mall, at the heart of the university. The exhibit will be the centrepiece of an educational outreach program and collection of more than two million specimens of mammals, fish, shells, fossils, insects, birds and plants. The Museum will be the first public institution in Canada to focus exclusively on biodiversity research and education. “Through the collaboration of two provinces and world-class museums, Canadians from coast to coast will have an opportunity to fully appreciate this magnificent animal,” says Andrew Trites, researcher at the UBC Research Centre and Director of UBC’s Marine Mammal Unit. For more info: Beaty Biodiversity Museum

The blue whale is listed as an endangered species under Canada’s Species at Risk Act. It is also on the IUCN (The World Conservation Union) Red List of endangered species. There are estimated to be 4,500 blue whales left in the world, down from 350,000 before whaling activities began. The blue whale is the biggest animal ever to have lived on earth – bigger than any dinosaur. It is longer than two 40-foot long school buses parked one behind the other. A blue whale’s heart is the size of a car, and the arteries connected to the heart are large enough for a human baby to crawl through. The blue whale is also the loudest animal. At 190 decibels, a blue whale’s call is louder than a jet (140 decibels), and much louder than a person can shout (70 decibels). Blue whales inhabit every ocean on the planet, and travel from frigid polar waters, where they feed, to warm tropical waters, where they give birth to their calves. In spite of their great size and range, we know very little about these gentle giants.