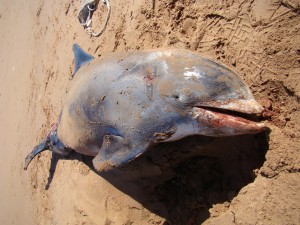 This May, staff from the Atlantic Canadian Cooperative Wildlife Health Centre were sent to investigate the death of a beached dolphin with the help of local provincial fisheries and wildlife officers in Prince Edward Island. The dolphin was determined to be a white-beaked dolphin, which are relatively common within the North Atlantic Ocean with a range extending from Atlantic Canada to Greenland, Iceland and Northern France. The animal was a non-pregnant female, weighed 201kg and was 2.64m long. The cause of death is unknown at this time and currently being further investigated.

The Atlantic CCWHC office responds to approximately 5 dolphin cases every year.  These are usually Atlantic white sided dolphins.  This is the fourth dolphin examined by the lab in 2013 and the second white-beaked dolphin ever received by the Atlantic CCWHC.