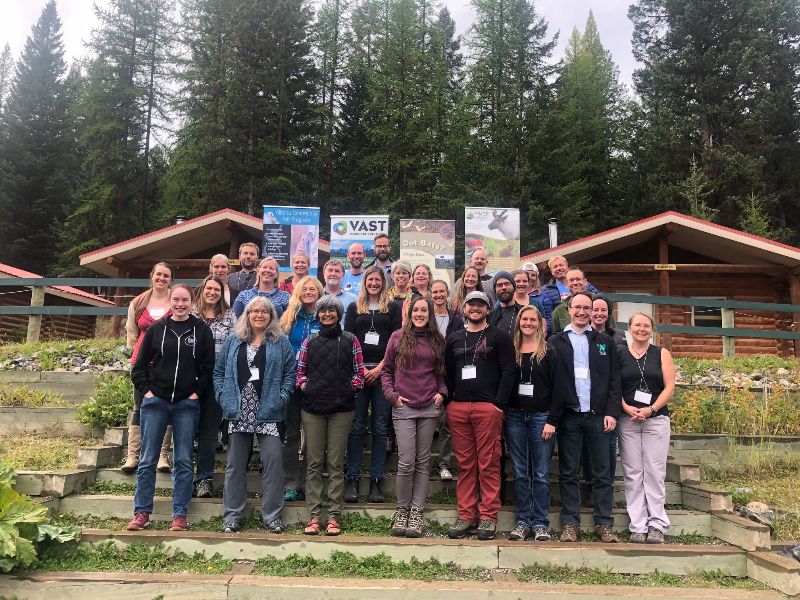 The British Columbia Bat Action Team (BC BAT) is a group of professional biologists, academic researchers, veterinarians, environmental educators, students, naturalists, wildlife rehabilitators, government biologists, and other people that are interested in bat conservation in BC. BC BAT developed the 2016 – 2020 Action Plan In Response to the Threat of White-nose Syndrome. http://www.bcbat.ca/wp-content/uploads/2017/01/BCBAT-Action-Plan.pdf. The Team holds regular meetings to review and update the plan, and to coordinate its strategic implementation. For this purpose, BC BAT convened for the first time in conjunction with the Alberta Bat Action Team at Blue Lake in September 2019. This document represents a summary of this meeting. Specific documents will be developed to summarize working sessions and updates to the BC Bat Action Plan. These documents will be made available through BC BAT as they become available.

The first interprovincial British Columbia-Alberta Bat Action Team (BAT) was held on Sept 13-15, 2019 at Blue Lake Camp, in the beautiful Purcell Mountains west of the Village of Canal Flats, BC. In total, 32 individuals representing academics, government – both federal and provincial (AB and BC), conservation groups, and consultants attended the 2-day strategic planning meeting. The meeting had broad geographic representation from regions across the two provinces, including the Kootenays, Okanagan, lower Mainland, Vancouver Island, Peace, Edson, Calgary, Lethbridge and Edmonton regions.

The group concluded Saturday evening with a hands-on demonstration of the most recent advances in acoustic detection and analysis of bat calls, promotional material used to engage with the public, Pd/WNS-related decontamination protocols, and a database used to store, organize and summarize community bat-related information. We also watched the Telus-supported film ‘Bats of Alberta’ filmed and produced by Alberta resident, Jason Headley, with discussion about future production of a Bats of BC film as an outreach tool.

In addition to information sharing and networking, our meeting had the following outcomes. We: