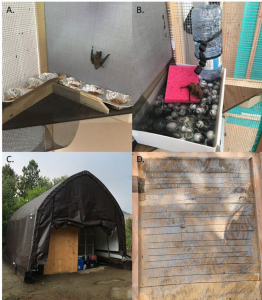 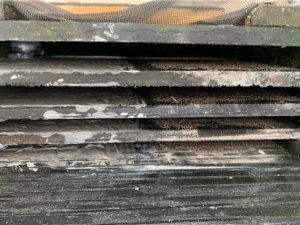 Four chamber bat box for the probiotic microclimate challenge. The left side of the chambers were used for paste inoculation and the right side was for clay powder inoculation. A second powder experiment was conducted deeper within the bat box at 12 inches (not seen here).

Our research team was previously awarded a research grant from the US National Fish and Wildlife Foundation – Bat for the Future Fund (NFWF-BFF) to conduct a research project entitled “Developing a Probiotic Approach to Reduce Severity of White-Nose Syndrome in Bats (Canada)” from September 2017 to December 2019 to find a preventative measure against white-nose syndrome. Using bacteria sourced from local healthy bats, we have successfully derived a probiotic prophylaxis for the prevention of WNS, the fungal disease poised to devastate bat populations in western North America. We effectively tested this probiotic, consisting of bacteria naturally occurring on western Canada’s bats, on captive building-roosting bats and concluded that it is safe for bats and effective at changing bat-wing microbiomes. In what we have described as a “Robinhood Approach,” we are essentially providing building-roosting bats with anti-Pd microbes from on other western bats. These are natural bacteria that can be found around bats (e.g. in the soil) or on some bat’s wings as part of their natural microflora. Our in vitro lab experiments demonstrated that our probiotic cocktail slows the growth of the fungus Pseudogymnoascus destructans (Pd). However, these probiotic bacteria showed no or limited activity against distantly related fungi. 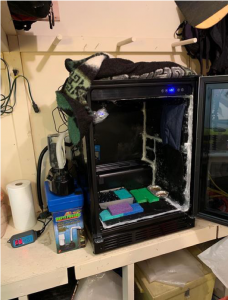 A modified beverage cooler was converted into an environmental chamber for the bat hibernation experiment. The temperature and humidity were controlled by a thermostat and reptile humidifier, respectively. Humidity was monitored with a sensor to retain >90% relative humidity. A wireless camera was installed to view the bats and record activity. Initially a roost pouch and food were available for the acclimation period but were removed shortly afterwards.

In 2019 we completed a final comprehensive captive trial including a summer component and a simulated hibernation. We also conducted pilot applications of the probiotic in the field; this small-scale field implementation took place at two maternity roosts in the Vancouver region. The developed application method is inexpensive, safe and easy to replicate elsewhere. Though, there remains much to be investigated in the next few years, we propose our model is one that could be followed by other regions prior to the arrival of WNS. We suggest that our exact probiotic mixture not be applied to bats over an area beyond Pacific Northwest to avoid potential introduction of new microbes into other bat communities. However, we believe our protocol provides to others an effective approach to obtaining anti-Pd microbes from bats, developing and testing a probiotic, and applying it to a large number of bats in areas not yet devastated by WNS. Our summer application approach is one of prevention, not treatment of this disease, which is well suited for use in western states and provinces where we are do not know where bats overwinter, but in many places we know where large colonies of reproductive females spend the summer. Our probiotic could substantially reduce mortality of tens of thousands of female building-roosting bats.

This featured story was submitted to our June issue of Bat Monthly. Read the full newsletter here.