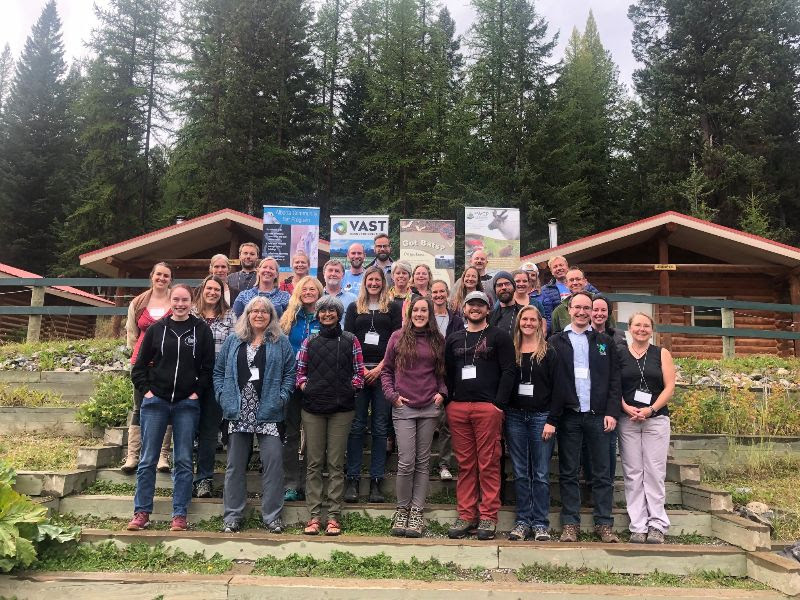 The British Columbia Bat Action Team (BC BAT) is a group of professional biologists, academic researchers, veterinarians, environmental educators, students, naturalists, wildlife rehabilitators, government biologists, and other people that are interested in bat conservation in BC. BC BAT developed the 2016 – 2020 Action Plan In Response to the Threat of White-nose Syndrome. http://www.bcbat.ca/wp-content/uploads/2017/01/BCBAT-Action-Plan.pdf. The Team holds regular meetings to review and update the plan, and to coordinate its strategic implementation. For this purpose, BC BAT convened for the first time in conjunction with the Alberta Bat Action Team at Blue Lake in September 2019. This document represents a summary of this meeting. Specific documents will be developed to summarize working sessions and updates to the BC Bat Action Plan. These documents will be made available through BC BAT as they become available. Click here for more… 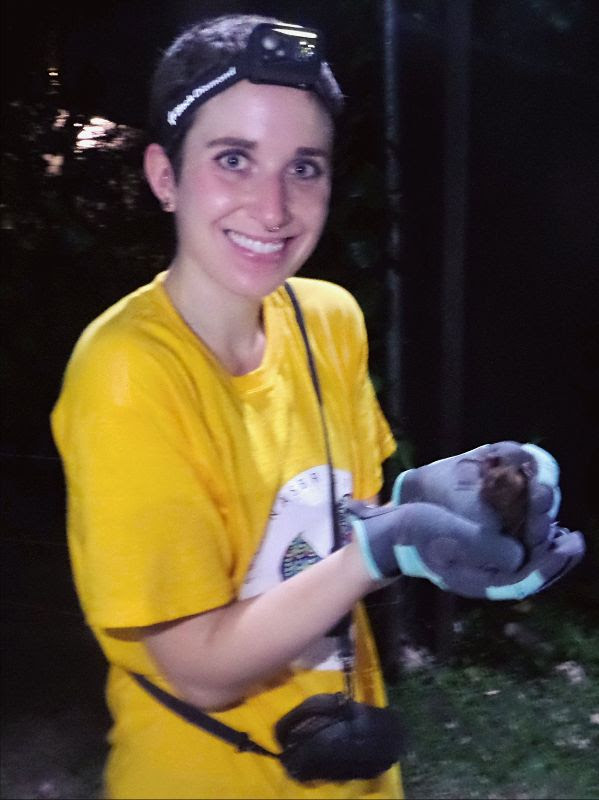 I have recently started a two-year Habitat Stewardship Program (HSP) project (2019-2021) funded by Environment and Climate Change Canada to develop acoustic curriculum for monitoring bats in Atlantic Canada following the NABat protocol. A large portion of my job consists of outreach and training, with the overall goal to train non-governmental organisations, Indigenous peoples, and other conservation groups to expand NABat acoustic monitoring across all four Atlantic Provinces. Our previous two-year HSP project (2017-2019) consisted of developing bats in buildings Best Management Practices for PE and NL, and our new project will allow me to expand our bats in buildings conservation work into NS and NB, where we will train pest control operators on how to best manage bats in buildings so that both bats and humans can be healthy and safe. Another component of my job is managing the bat hotline for Atlantic Canada, and I enjoy receiving all manner of bat-related calls from the public! In my position I work very closely with a wide variety of collaborators, including individuals from provincial wildlife departments, public health departments, animal health departments, researchers, and local watershed groups; I greatly value their guidance and appreciate the collaborative approach we take while working together to protect our local bat populations.

I graduated from Queen’s University (Kingston, ON) with a Bachelor of Arts Honours in Drama and World Language Studies and then moved to Japan to teach English for two years. My foray into the world of science consisted of a summer job in PE National Park during my time as a student, where I monitored piping plover and assisted with other conservation-themed projects. After returning to Canada, I decided that I wanted to pursue a degree in science. I graduated from Trent University (Peterborough, ON) with a Bachelor of Science Honours in Conservation Biology. While attending Trent University, I participated in my first bat-related research project: my undergraduate research thesis was based on evaluating and improving the mobile acoustic survey monitoring technique outlined in the NABat protocol for use in PE’s highly fragmented landscape. I look forward to continuing to work on our bat team for the next two years!

Bats could be key to mosquito battle in Comox Valley locations

Health officials urge caution after rabid bat found at elementary school
1st rabid bat since 2016 found in the city
While bat rabies remains a hot topic in the media, make sure you read the balanced messages about bat rabies written by Tessa McBurney with CWHC Atlantic.
Also see our latest bat blog about how to recognize whether a bat is just hanging out or showing signs of disease.

Publications
Evidence of region‐wide bat population decline from long‐term monitoring and Bayesian occupancy models with empirically informed priors
Rodhouse et al.
Strategic conservation efforts for cryptic species, especially bats, are hindered by limited understanding of distribution and population trends. Integrating long‐term encounter surveys with multi‐season occupancy models provides a solution whereby inferences about changing occupancy probabilities and latent changes in abundance can be supported. When harnessed to a Bayesian inferential paradigm, this modeling framework offers flexibility for conservation programs that need to update prior model‐based understanding about at‐risk species with new data. This scenario is exemplified by a bat monitoring program in the Pacific Northwestern United States in which results from 8 years of surveys from 2003 to 2010 require updating with new data from 2016 to 2018. The new data were collected after the arrival of bat white‐nose syndrome and expansion of wind power generation, stressors expected to cause population declines in at least two vulnerable species, little brown bat (Myotis lucifugus) and the hoary bat (Lasiurus cinereus). We used multi‐season occupancy models with empirically informed prior distributions drawn from previous occupancy results (2003–2010) to assess evidence of contemporary decline in these two species. Empirically informed priors provided the bridge across the two monitoring periods and increased precision of parameter posterior distributions, but did not alter inferences relative to use of vague priors. We found evidence of region‐wide summertime decline for the hoary bat (urn:x-wiley:20457758:media:ece35612:ece35612-math-0001 = 0.86 ± 0.10) since 2010, but no evidence of decline for the little brown bat (urn:x-wiley:20457758:media:ece35612:ece35612-math-0002 = 1.1 ± 0.10). White‐nose syndrome was documented in the region in 2016 and may not yet have caused regional impact to the little brown bat. However, our discovery of hoary bat decline is consistent with the hypothesis that the longer duration and greater geographic extent of the wind energy stressor (collision and barotrauma) have impacted the species. These hypotheses can be evaluated and updated over time within our framework of pre–post impact monitoring and modeling. Our approach provides the foundation for a strategic evidence‐based conservation system and contributes to a growing preponderance of evidence from multiple lines of inquiry that bat species are declining.
Ecology and Evolution (2019). https://doi.org/10.1002/ece3.5612

Lipolytic Activity and the Utilization of Fatty Acids Associated with Bat Sebum by Pseudogymnoascus destructans
Gabriel et al.
Pseudogymnoascus destructans is the causative agent of a fungal infection of bats known as white-nose syndrome (WNS). Since its discovery in 2006, it has been responsible for precipitous declines of several species of cave-dwelling North American bats. While numerous advancements in the understanding of the disease processes underlying WNS have been made in recent years, there are still many aspects of WNS, particularly with respect to pathogen virulence, that remain unknown. In this preliminary investigation, we sought to further elucidate the disease cycle by concentrating on the pathogen, with specific focus on its ability to utilize lipids that compose bat wing sebum and are found in wing membranes, as a substrate for energy and growth. In vitro growth experiments were conducted with the three most common fatty acids that comprise bat sebum: oleic, palmitic, and stearic acids. None of the fatty acids were observed to contribute a significant difference in mean growth from controls grown on SDA, although morphological differences were observed in several instances. Additionally, as an accompaniment to the growth experiments, bat wing explants from Perimyotis subflavus and Eptesicus fuscus were fluorescently stained to visualize the difference in distribution of 16- and 18-carbon chain fatty acids in the wing membrane. Which substrates contribute to the growth of P. destructans is important to understanding the progressive impact P. destructans has on bat health through the course of the disease cycle.
Mycopathologia (2019). https://doi.org/10.1007/s11046-019-00381-4

Resistance is futile: RNA-sequencing reveals differing responses to bat fungal pathogen in Nearctic Myotis lucifugus and Palearctic Myotis myotis
Lilley et al.
Resistance and tolerance allow organisms to cope with potentially life-threatening pathogens. Recently introduced pathogens initially induce resistance responses, but natural selection favors the development of tolerance, allowing for a commensal relationship to evolve. Mycosis by Pseudogymnoascus destructans, causing white-nose syndrome (WNS) in Nearctic hibernating bats, has resulted in population declines since 2006. The pathogen, which spread from Europe, has infected species of Palearctic Myotis for a longer period. We compared ecologically relevant responses to the fungal infection in the susceptible Nearctic M. lucifugus and less susceptible Palearctic M. myotis, to uncover factors contributing to survival differences in the two species. Samples were collected from euthermic bats during arousal from hibernation, a naturally occurring phenomenon, during which transcriptional responses are activated. We compared the whole-transcriptome responses in wild bats infected with P. destructans hibernating in their natural habitat. Our results show dramatically different local transcriptional responses to the pathogen between uninfected and infected samples from the two species. Whereas we found 1526 significantly upregulated or downregulated transcripts in infected M. lucifugus, only one transcript was downregulated in M. myotis. The upregulated response pathways in M. lucifugus include immune cell activation and migration, and inflammatory pathways, indicative of an unsuccessful attempt to resist the infection. In contrast, M. myotis appears to tolerate P. destructans infection by not activating a transcriptional response. These host-microbe interactions determine pathology, contributing to WNS susceptibility, or commensalism, promoting tolerance to fungal colonization during hibernation that favors survival.
Oecologia (2019). https://doi.org/10.1007/s00442-019-04499-6

White-nose syndrome dramatically altered the summer bat assemblage in a temperate Southern Appalachian forest
O’Keefe et al.
White-nose syndrome (WNS), an epizootic disease caused by an invasive fungus, threatens bat populations across North America. WNS-induced changes in summer bat populations could impact functional diversity. We assessed the shift in relative abundance within an assemblage of bats in a temperate southern Appalachian forest in North Carolina and Tennessee from 2009 through 2016. We used mixed linear effects models to identify bat species significantly impacted by WNS and those showing resistance, and to determine effects on reproductive rates for WNS-affected species. Four once-common species — the little brown bat (Myotis lucifugus), Indiana bat (M. sodalis), northern long-eared bat (M. septentrionalis), and tri-colored bat (Perimyotis subflavus) — showed significant and dramatic declines (82–99%), while the big brown bat (Eptesicus fuscus), red bat (Lasiurus borealis), Rafinesque’s big-eared bat (Corynorhinus rafinesquii), and small-footed bat (M. leibii) did not decline significantly after WNS was detected on the landscape. We detected no significant interactions between reproductive condition and WNS period (pre- and post-arrival of the disease). Declines in summer populations mirrored declines detected in nearby winter hibernacula. Because the loss of WNS-affected bat species could negatively impact ecosystem health, it is important to monitor bat, insect, and plant community responses wherever WNS threatens bats. We hypothesize that, in the absence of small-bodied bats, there might be increases in populations of small forest pests, such as defoliating moths, as larger WNS-resistant bats may avoid or miss these small prey.
Mammalian Biology (2019). https://doi.org/10.1016/j.mambio.2019.09.005 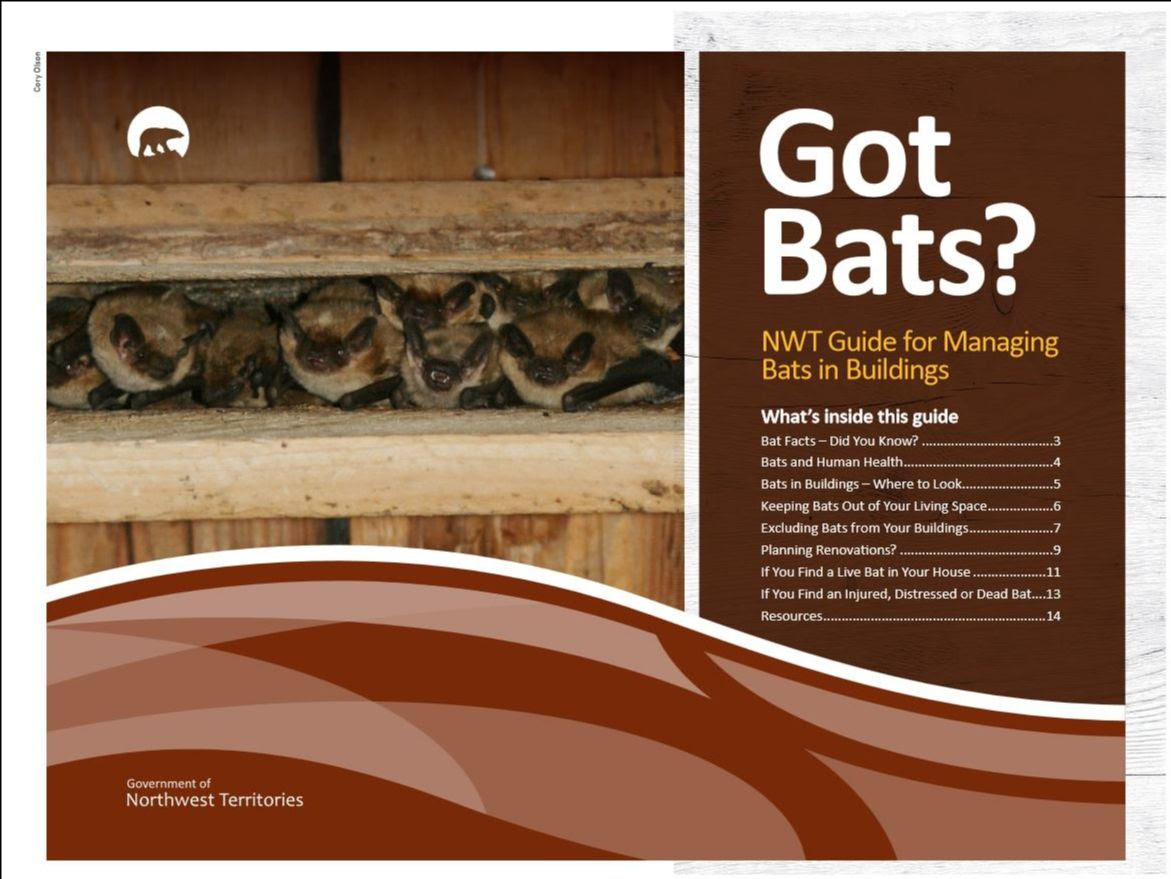 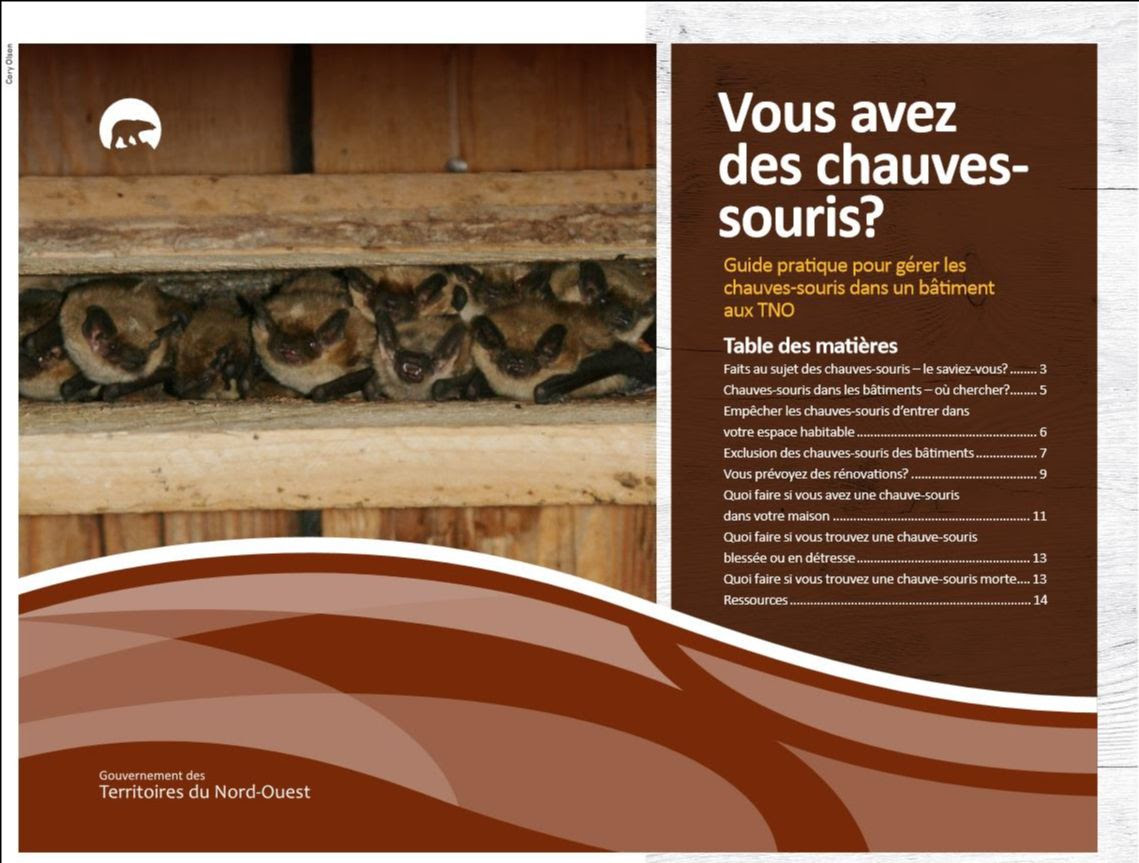 Webinars and videos
Get to Know the Faces of Bat Week 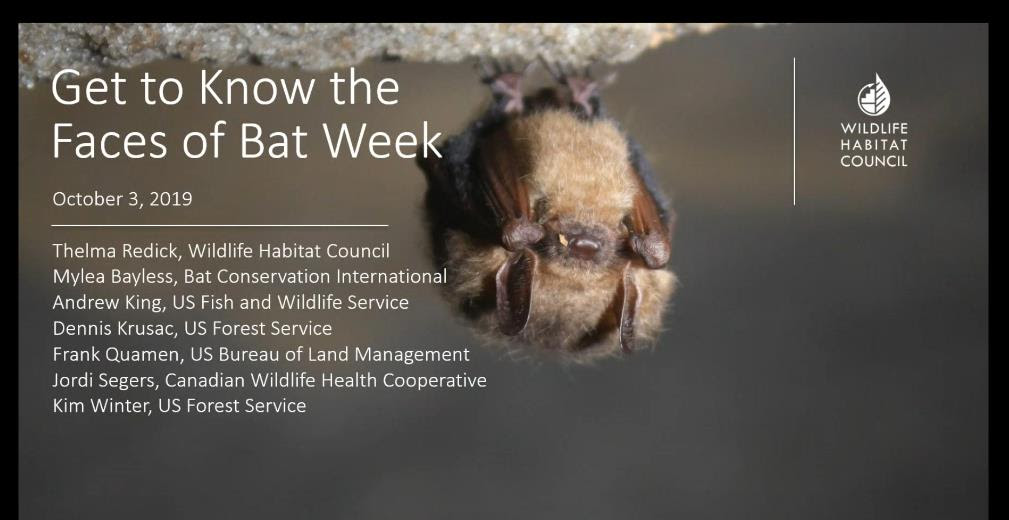 The Bats of Alberta 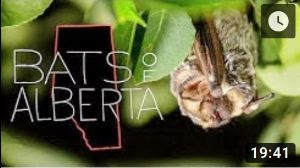 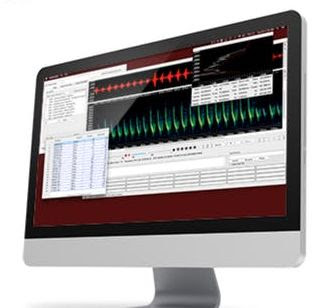 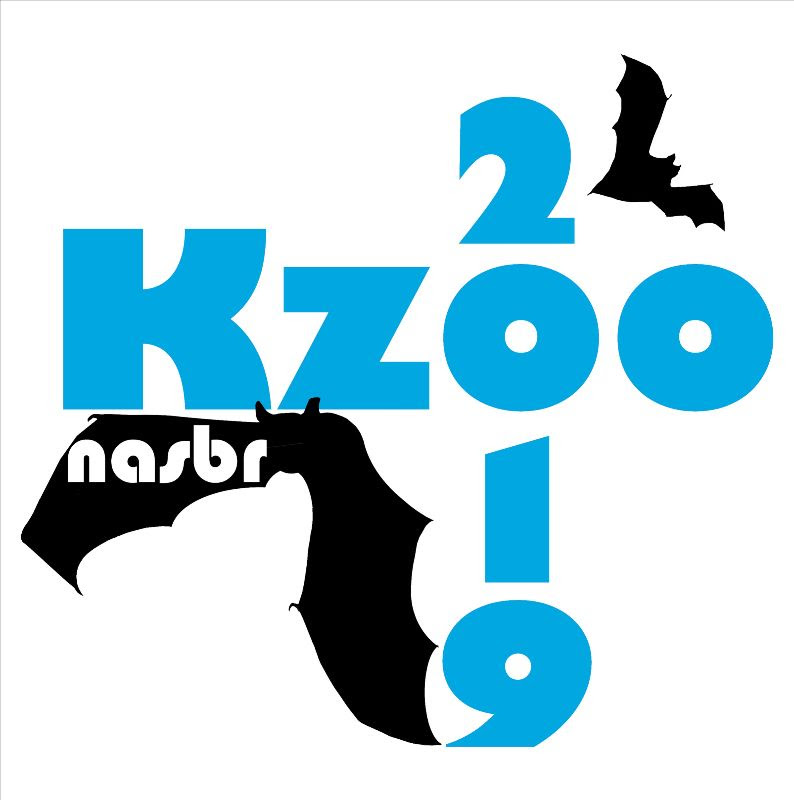 Bat Week
October 24-31, 2019
Bat Week is an annual, international celebration of the role of bats in nature. Bat Week is organized by a team of representatives from across the United States and Canada from conservation organizations and government departments.